So…how do I fix a painting that I don’t like?  Easy!  I just took the original painting and repainted over every single aspect of it.

The first round (top) was too muddy in the tree forms along the middle of the painting.  The mountains, by contrast, were too flat.  The greens in the field alternated between frosty mint and pure yellow ochre – only one of which was actually correct.  And then there was the sky…the crisp blue sky that served as a reminder to me: unless I am in the Caribbean I am never, ever, ever allowed to use Pthalo blue in the sky. 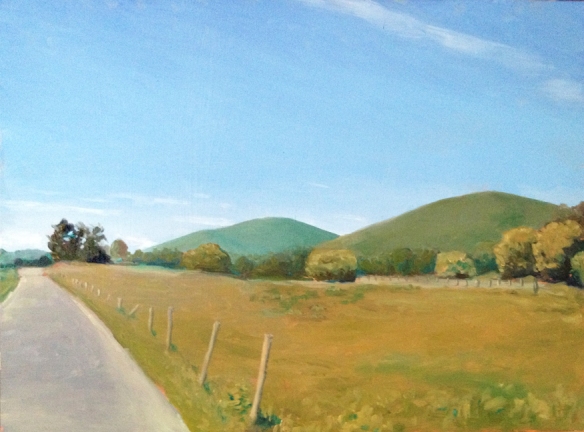 The second time around I used a series of pre-mixed greens (really only slightly dulled down yellow ochre) and slowly blocked in the form of the trees.  The field was flattened to get rid of the annoying random chatter.  Then the sky was pushed back with a mix of Ti white, cobalt blue, and a bit of a home-made grey to give it that summer hazy feel that I was going for in the first place.  There are still some issues with the painting – but miles better than the first time.  (also, once again my camera is pulling the greens into the orange family)