Its August, which means another trip up to one of my favorite places: Acadia National Park.  If you’ve never been Acadia is this weird mixture of almost primeval landscapes, early 20th century industry, and New England charm.

We stayed on the quiet side of the island, and I did 5 paintings in 6 days.  The weather was a bit uncooperative but that’s how it goes with painting in the wild. 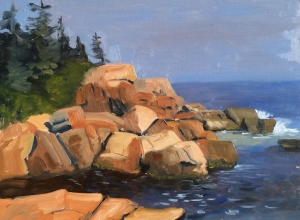 One of the biggest pressures I find is choosing a spot to paint.  I’m so seduced by the beautiful views that I want to paint them all, but that risks being repetitive.  I stopped at a dozen places before settling on this one.  The day was muggy and hot with a blazing sun, no shade, and no sunscreen.  I was rushing and things fell apart pretty quickly. I’m happy with the blues and browns in the water, and the olive green rocks to the edge.  Everything else is a mess. Unless I was emulating Marsden Hartley, in which case it’s great. 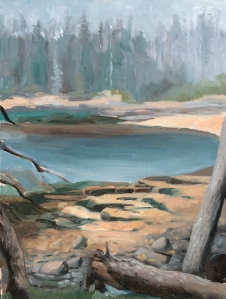 The fog in Acadia is almost a living entity.  On Wednesday it rolled in and didn’t leave until Saturday.  This was off a little hike and while there are some areas that I really like – the almost impressionistic trees – the foreground is really bland.  I had meant to leave room to add in some dark pine boughs to frame the piece, which may help. 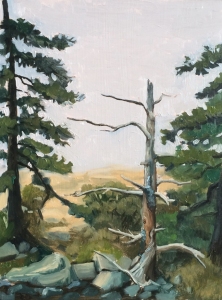 I dragged Lance along on another short hike out to the coast.  He set up a chair and read a book, I painted the only thing I could see through the fog – this stark dead tree.  I started thinking in terms of color temperature and I think it helped, although not much could save those poor plastic rocks in the bottom. 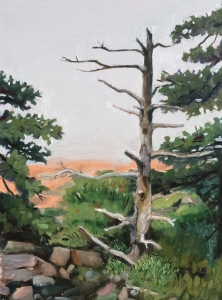 After I paint I often find myself staring at the painting or a photo of it and wondering what I could have done better.  In the case of the tree I was really unsatisfied with the rocks, and I felt the branches in the earlier painting didn’t convey the shadows properly.  I also thought the tree to the right side had gotten muddled and lost.

So I went back again and set up in the same spot.  I trimmed the composition a little closer and tried to be as careful and deliberate as I could.  It’s a much better attempt, but those goddam rocks still feel plasticy and amorphous.

This is from the same area I hiked all week.  I was tempted to go back and do more dead trees, but honestly it was getting a little depressing.  This was an ambitious piece – two panels side by side, and completed in the time it normally takes me to do one.

I’m very happy with the interplay of colors on the cliffs. I struggle a lot with the rock colors becoming too chalky or too orangey (see above).  I think these are one of the best representations I’ve done so far.  The tree line is a little too swoopy and the water got away from me.
I was on an exposed part of the trail, which meant I had a lot of audience for much of the painting, which can be a little distracting. There was also a potential thunderstorm on the way which urged me along.  I finished painting just as the first drops of rain fell.